Another dawn.
Another cyber catch up session.
I kid you not, I am up again in the just-before-dawn dark, to try and catch up, realising that Friday is here = another week almost over = am off on my travels again on Sunday = backlog saturation point fast approaching.

The week has hurtled by (in the nicest of fashions, which is all to the good), but as I told you, surviving the craziness of Delhi in these few months of fabulous winter weather is an art unto itself.

But the downside to all this gadding about is the mind-numbingly awful traffic, which is getting steadily worse day on day, I swear.

Regular traffic is bad here in Delhi, full stop  + there is all that extra wedding traffic, ‘cos ’tis the season + in our part of Delhi, construction of a Metro line has started, which runs parallel to the road we take every day to go to the riding club. One lane has already been gobbled up on either side for construction, so the resultant chaos just gets worse day by day.
Last night, Himmat and I went to Jantar Mantar for THE most fabulous show called Luminocity (more anon) but we came this close to calling it quits, just because of the awfulness of the traffic. Solid, noisy jams in every single direction we took, and as for finding a parking slot…

We finally worked on the “throwing good money after bad” principle – having wasted so much time and petrol in the traffic, we might as well push on and arrive at the show late. Thank goodness we did, because it was great (more anon).

I haven’t been to Connaught Place in ages, and last night I remembered why. Traffic and chaos and noise on an exhaustingly pointless scale.

There really is no need to honk nonstop when you are in solid traffic, boys.

There really is no need to carve people up just because you can, boys.

But everyone does, and so the driving DNA of this city carries on.

In the end, we tried out a new multi-storey car park on Baba Kharak Singh Marg and the parking attendants must have thought we were fresh out of the boondocks, as we gawped at the automated lift parking, and the cleanliness, and the technology, and the overall efficiency of it.

I tried to film my car going on a lift for the first time in its life and going off to be parked automatically, but was told that photography was not allowed. Shades of old India peeping out from behind the efficient brave new facade, but anyway, much impressed, off we went to Jantar Mantar.

The French put on a light show (the description doesn’t do it justice at all) projecting images connected to astrology and astronomy on the lovely buildings at Jantar Mantar (note to self : need to visit more than once every 30 years, which is roughly what it is).
Crowds wandered around, everyone seemingly as dazzled as we were by the images and contrast and sheer -well – funkiness of it all.
Judge for yourselves… 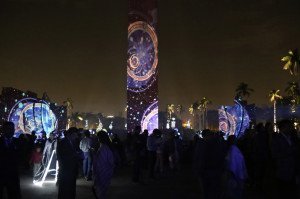 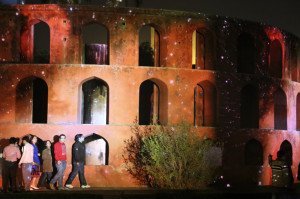 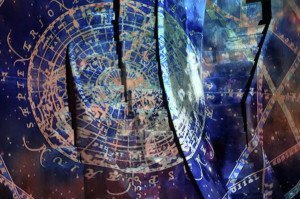 Did you ever see anything more fabulous ?

As ever in Delhi, we bumped into friends- Tarun Tahiliani, Rita and Felipe, Himali, and they were all seemingly as dazzled as we were.

Great fun and, dare I say it, worth the traffic, which was just as solid on the return journey, but our spirits had been lifted by the show, so we grumbled a tad less…