I haven’t been to the Aravali Bio-diversity in Gurgaon since last summer, when I used to train there with a friend in the baking summer heat for our Mentok Kangri climb.

Fast forward to a horrid grey, cold, damp, January morning when I found myself back there with my running group for a run (naturally) and a bit of a boot camp, with the good folks of Fitness First and Magic Bus, as well as “our” own Back2Fitness gurus.

The park was emptier than in those far off baking hot summer mornings, but it was every bit as good a venue as I had remembered.  Pretty clean –  actually, let’s be honest, very clean – and there are more fences and gates up now than before –  is that a good thing ?  Dunno.  I suppose so.

Saw no wildlife this time, other than the sad sight of a dead nilgai on the road outside the park.

One round of the park, using the longest track, is a little over 4 km, and has lots of ups and downs which makes the going more difficult than some of the other places where we run.

We started in the auditorium for a chat and some pre-run stretches and warm ups.

Sadly, some idiot has graffiti-ed the beautiful natural stone backdrop… 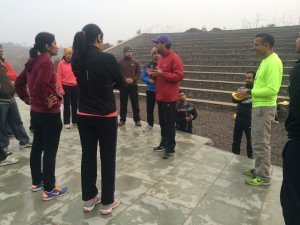 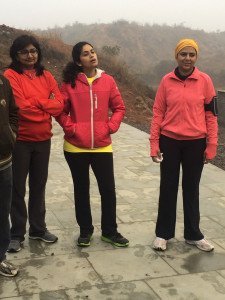 Our physio friends (below) 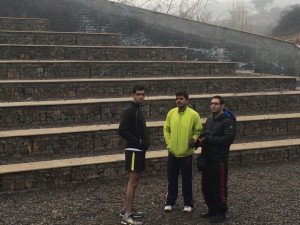 We would later be made to run up and down those steps by the Fitness First trainers, but that’s another story… 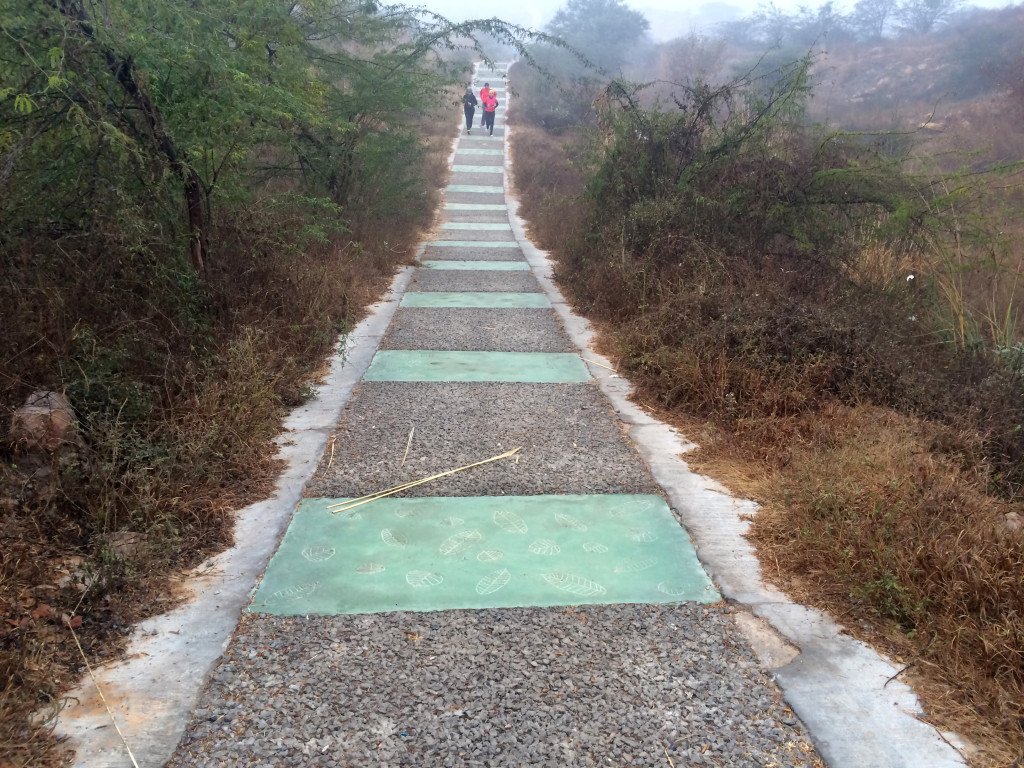 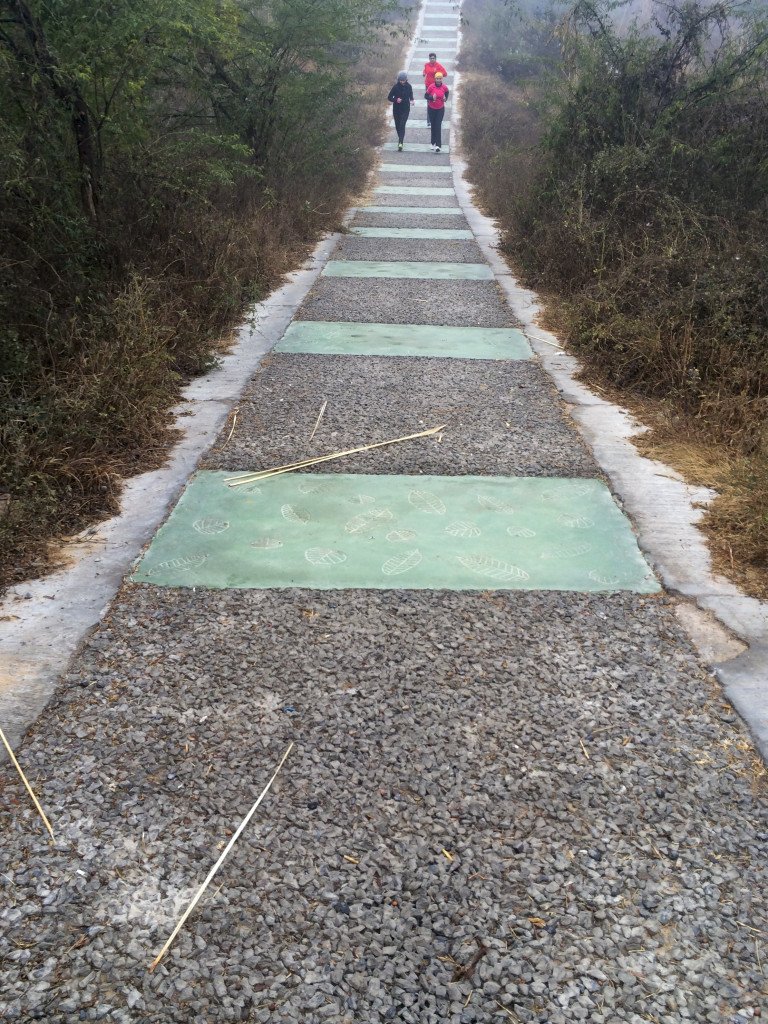 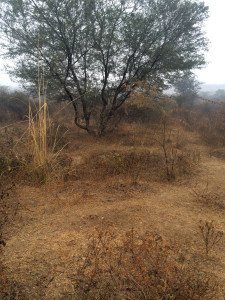 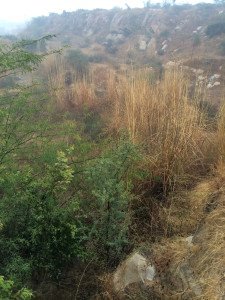 One of the 2 new gates 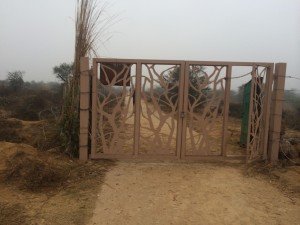 And, as I mentioned in my original review, the park feels very safe.  Even on stretches where there wasn’t anyone within sight/ear-shot, like below, I never felt worried for a moment. 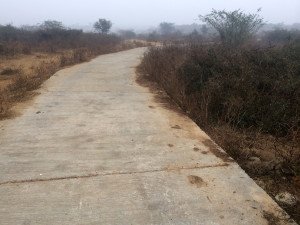 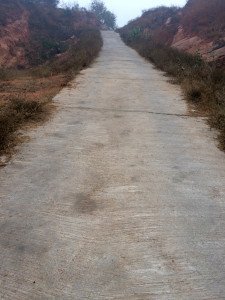 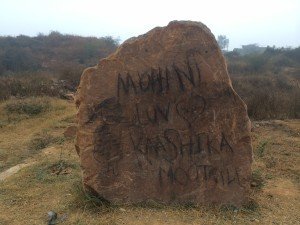 …which Sonam & Katha valiantly tried to hide from my irritated view, bless them. 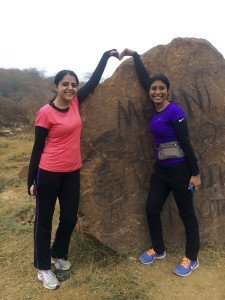 Here is the track log, showing the outer 4km loop and a shorter one we did because we were beginning to feel cold, standing around –  and how marvelous to be able to run to keep warm.  What progress we have made in 4 short months… 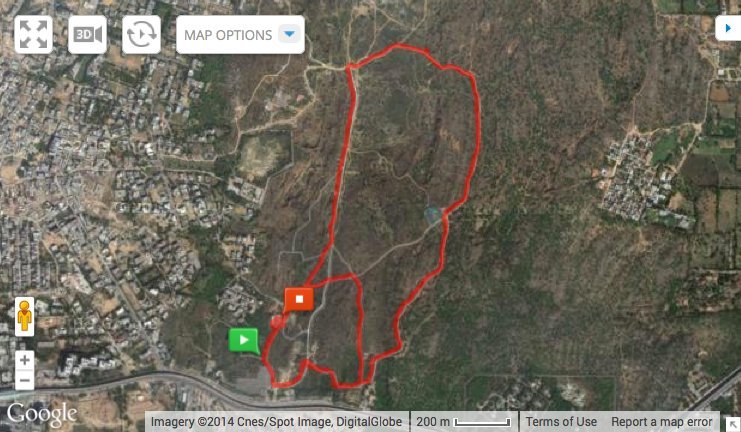 A good place to run for everyone who lives in Gurgaon and –  as I know from personal experience – it’s definitely worth commuting from Delhi, especially at weekends when the traffic is bearable – in order to run in such a wild yet safe environment.

I like to have a “take home” moment from each run, and from this damp, grey run it was one of the team building exercises we did with The Magic Bus people.  For the first time ever in my life, I played football !  Well, yes, that’s a bit of an exaggeration, but we did kick a football around and I a-l-m-o-s-t scored a goal.  But didn’t.