I mentioned in an earlier brief blog post (connectivity was a bit of an issue in Tadoba, hence brevity) that we witnessed a tigress killing a langur and how saddened we all were by it.  I have only just started editing my photos, so will share the drama with you over the next few days, but here is the kind of image that moved us all.

I think if the tigress (P2 is her name) had killed a deer or a pig, it would have been less moving than this little fellow, with his arms reaching out to her –  you will see images of this later, once I have finished editing.  Here P2 has chased him up the tree, and though partially hidden from view, you can just see him at the right of the trunk.

She seemed to toy with him, to such an extent that it almost seemed like a game.  The kill took 7 minutes, with lots of pausing and waiting and looking away almost as though she were losing interest in the poor wounded little creature, which sat there looking at her. 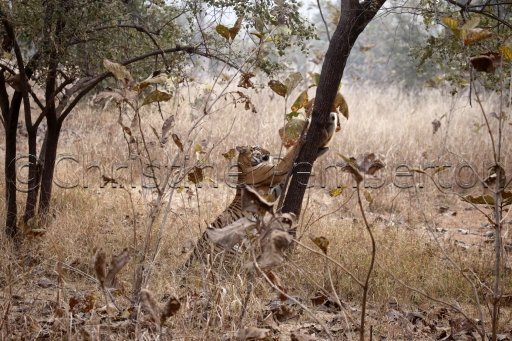 Now what’s all this about India’s gold-filled milk?