So there was I, this chilly December lunchtime, out for a run in Lutyens Delhi.  The pampered, protected heart of our nation.  Supposedly.

As I ran past the National Museum on Janpath – totally in the pampered, protected heart of our nation etc etc – I noticed 3 teenage boys ahead of me.  Thin.  Greasy hair.  School uniforms.  Backpacks half open.  They looked at me, whispered, then turned round and faced me, 3 abreast, blocking the pavement.

I ignored them, so they came a step closer.

Another step closer, and they all said “Time” in unison.

I went to side-step them and one of them then made a fatal mistake.

“Fuck you” he said, and they all paused, waiting to see my reaction.

In Hindi I yelled, “WHAT did you just say?”

And then they started running.

I might be old enough to be your grandmother, but I can run.  I chased them down Janpath, much to their apparent horror, and as I ran  –  eventually –  past 2 cops I yelled, once again in Hindi, “Stop those boys”.

Now in this city, with its recent history of sexual attacks on women, you would hope that 2 cops seeing a woman chasing after 3 youths might be galvanised into action.

Not a bit of it.  And this is slap bang in the heart of tourist Delhi, remember.

One of them said “Purse” as I ran past, but didn’t move a muscle otherwise, and I made an on-the-spot decision to ignore these Keystone Cops and chase after the boys, who ran into one of the large colonial-era Lutyens bungalows.

I presume their parents work there, but they obviously realised that I meant business and would follow them into the quarters, so they ran back out, and we continued for a few more minutes till they slowed down, puffing and panting. 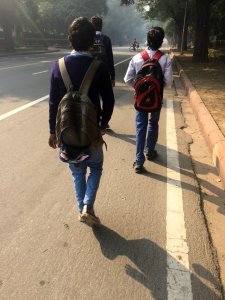 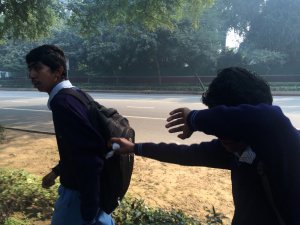 One of them started saying, in Hindi “We didn’t do anything” over and over again, to which I said “So why are you running away then?”

He instantly did a namaste and said “Maf karo auntie, maf karo” over and over again.

“It was just words,” he kept saying.

I slapped his greasy head at this, and yelled – oh how I yelled, hoping to attract a passer-by’s attention, but to no avail – “So would you use that word to your mother (twist of his ear) or to your sister (another twist of his ear)?” 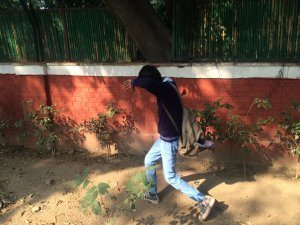 And then I ran off (my split time for that km was excellent, I might add).

I wasn’t in any physical danger, despite the lack of police help and passer-by-indifference – but it was the way the 3 creeps ganged up, that made me see red.

That could have been my beautiful daughter, or anyone else’s beautiful daughter.  If they were brazen about cheeking off an old age pensioner, in broad daylight, just think what they might have done to a young girl.

And I reckon that a slap to the head might knock some sense into his brain.  Perhaps prevent him growing up into a full blown creep.

No further moral to this story, other than the obvious – running came to the rescue.