As I sit here shivering on another bitterly cold foggy Delhi morning, I have (obviously) delayed my run till later in the day, when hopefully the sun will have finally broken through the fog.  I am not about to suffer cold and pollution unnecessarily, and in any case Delhi’s current maximum temperatures j-u-s-t about equal Bombay’s minimum.  I head to Bombay tomorrow to run the SCMM half marathon on Sunday, and the heat after this miserable cold will probably be the biggest challenge.

“Butwhere is POTUS in all this?” do I hear you cry?

When I was running at dawn, just a few months ago, I regularly ran around Lutyens Delhi, revelling in India Gate and Raj Path, which I would oftentimes have all for myself.

Since I now set out at midday, or even later, because of the cold, there is no question of driving into Central Delhi, because (a) it wastes far too much time in the dreadful traffic and (b) the pollution is a shocker.  So I run in a local park.

Which is just as well, because the centre of Delhi is more and more resembling a fortress, as we head towards Republic Day and the visit of President Obama.

See, I finally got there.

I haven’t run down Rajpath in at least 10 days, and already then parts of it were closed off.

Call me an old curmudgeon (just you dare!) but I have to say I find the whole concept of a military parade beyond outdated, and a total and utter waste of money, and as for the inconvenience we the tax-paying citizens in Delhi endure…like streets closed off 4 weeks before an event.

Just read this story, below, and despair at the colossal, monumental, sheer, obscene waste of money and manpower, both ours and American.  And all for what?  A meeting or two but mainly photo ops, let’s be honest.

I’ll leave you to read it, and we can chat afterwards. 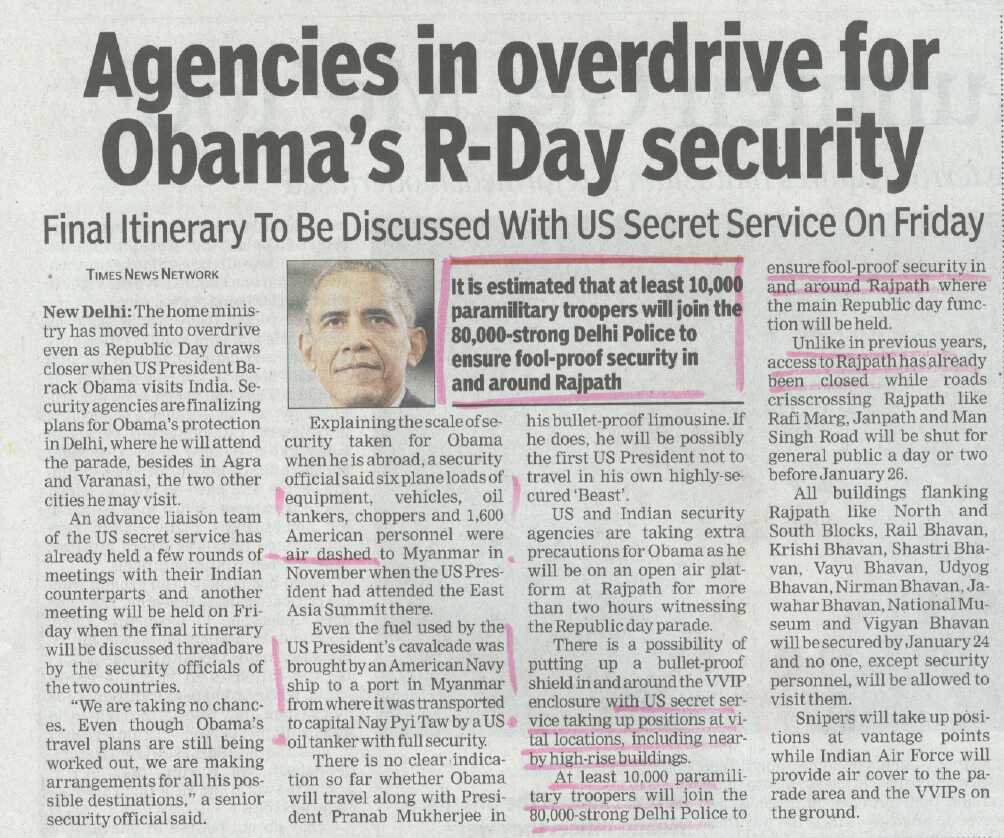 So I guess the 1600 Americans who were air-dashed (yaay!! One of THE best Indian-isms ever) to Burma were at the poor US taxpayer’s expense, so really no skin off our noses.  Other than extreme discomfort with such conspicuous waste.  I consider myself fairly up-to-date with current affairs, and yet I couldn’t tell you a single thing about the East Asia Summit.  Not one initiative.  Not even the photo op, to be honest…All that movement and money and manpower, and for what?

Now let’s turn our attention to our own backyard, shall we?

Being brutally honest, if Burma merited 1600 personnel and an oil tanker (oh for crying out loud), what on earth will we get here in India, where the security problem has to be more high profile and risky than Burma, surely?  How many thousands of people, how many tons of stuff, how many vehicles?  How much money and time and planning and manpower?  All for one man.

Please note that 10,000 paramilitary troopers + 80,000 police will ensure foolproof security “in and around Rajpath” –  for God’s sake, there will be more cops than spectators, surely?

Contrast this with the news that France –  in the wake of the awful Charlie Hebdo tragedy – has ordered 10,000 troops into the streets to protect the country.  Not Paris.  Not one street.  The country.  And we will have 90,000 Indian cops and troops “in and around Rajpath”.

“US secret service taking up positions at vital locations”.

Could I theoretically be stopped from going somewhere in Delhi by an American Secret Service Agent?  You have to be joking.

I thought we were over all this kow-towing to the Americans nonsense, when we removed the barriers outside the American Embassy.

Don’t get me wrong, some of my best friends are American (seriously) but what utter craven nonsense, to have the Secret Service swarming all over central Delhi.

And so, I end where I begin.  Call me an old curmudgeon, but I think such an obscene waste of money and manpower should be stopped once and for all.

Do we actually need a parade of military hardware and cultural floats?  Seriously?

Listen, I enjoy the camels and the motorbike despatch riders with the best of them, but it has all got totally out of hand.

Do we need a chief guest?  Other than that dratted photo op (and who can remember who was the chief guest last year, for example?) what purpose does a foreign guest serve?

I shall watch the parade on TV, as we have done for the last few years, completely defeated by the ludicrous security bundobast if you try and go there.  Everyone in the house will watch, because our dear, long-serving Nar Bahadur’s son is marching with his Gurkha regiment.  Much pride and excitement in the household, that this young man will have his moment of fame.

But otherwise, I am all for a total downscaling of what has become a costly logistical production.

Just think how much we could be protected by those 90,000 blokes, and how all that money could otherwise be used…