Oh come on, you know exactly which suit I mean.  There is only one suit in the country –  perhaps even the world, who knows, let’s be ambitious –  that is as infamous as the suit our esteemed PM wore when he met the always elegantly turned out POTUS last month.

The one with his name woven into it.

Here you go, a quick visual reminder, and you can always re-read my original post from a couple of weeks ago… 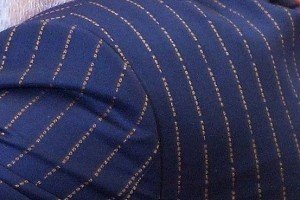 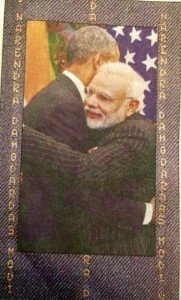 Anyway, That Suit has now been auctioned for charity (and NOT because it may have cost Mr. Modi’s party the Delhi elections, as some horrid mean-spirited folks insist…) and it went for Rs 4.31 crore.

But the good diamond merchants of Gujarat are chuffed to bits with their purchase, so good luck to ’em, say I.

I have just 2 things more to say.

1)  Am absolutely thrilled that so much money will now go towards cleaning up the filthy, polluted River Ganges, but how are we going to know how this money is used?  Will it be specifically accounted for?  Will we be told? (Those are all part of one question, yaar…)

2)  What does Mr. Virani think about all this?

Who is Mr.Virmani, do I hear you ask?  He’s the bloke with the impeccable good taste who gave the suit to our PM, that’s who.

“The base price of the suit, which has ‘Narendra Damodardas Modi’ monogrammed as pinstripes, was Rs 11 lakh. Businessman Ramesh Virani, who lives abroad, has claimed that he gifted the suit to Modi on his son’s wedding, which coincided with Obama’s visit on January 26.”

So, I repeat –  what do you suppose he thinks about his gift being coolly passed along to the auctioneers, a mere 3 weeks after it was worn to universal…er…comment.  If I were him, I’d feel a tad miffed that such a jolly fine pressy got recycled so rapidly and so very publicly.

But since it might well have cost them an election…