So, India has finally overtaken the Chinese.

Yaay, yippee yaay, do I hear you cry?

Please don’t cheer, because all that India has done is win the top spot in the most polluted city in the world stakes, with Delhi (where I live) now being, apparently, more polluted than Beijing.

Hardly an accolade to be proud of.

Most of the time, however, I simply don’t buy into this alarmist news.

Yes, our winters are shrouded in fog, but we have been told for so many years that our annual winter fog is because of those pesky farmers in Punjab burning their stubble.  Are we to believe, all of sudden, that this annual rural ritual has morphed into killer pollution?  Pollution that is –  we are told – knocking 3 years off all our lives.

Apparently, living here is the equivalent of smoking one pack of ciggies a day, and for a violent anti-smoker comme moi that is a bitter truth.

And to top it all, I am out and about running through this city every day.  Deep breathing all that pollution.

On Sunday, for example, I ran through Lutyens Delhi –  the elegant heart of the city –  but the sky was a deep blue, there was a slight breeze and it was wonderful and beautiful.  It simply didn’t feel in the least bit polluted.

This morning, however, was a completely different kettle of fish.

I ran the exact same route, but the sky was so grey and murky that you couldn’t even see Rashtrapati Bhavan, and there was a nasty “taste” in the air.  So much so that I actually cut my run short.  And with a half marathon this Sunday for which I am ill-prepared, cutting short a training run wasn’t part of my game plan.

Half way down Raj Path, I looked back –  no India Gate visible 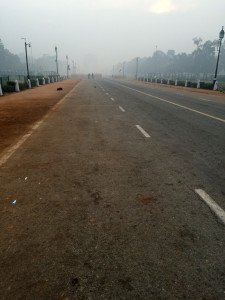 Nor was Rashtrapti Bhavan visible through the gloom.  This is from the closest point you are now allowed.  Security concerns no longer permit you to approach the railings as before. 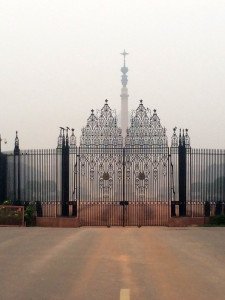 And I thought…now what? Having just been bitten by the running bug, do I have to stop because of the pollution?

As I pondered this tricky question, I also reflected on the filth that litters this city, despite all the “Swachh Bharat/Clean India” publicity.

As usual in Lutyens Delhi, there were battalions of sweepers out with their brooms, sweeping dust from one side of the road to the other, and gathering up leaves, and roundly ignoring the plastic and polystyrene that litters the place.  Guess it must be the Indian version of Jobsworth.

Not a stone’s throw from India Gate –  the heart of splendid monumental Delhi – this was the scene: 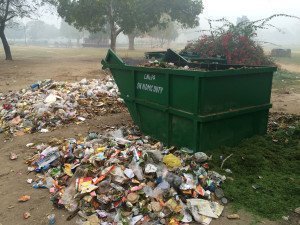 If it hasn’t been so mucky and foggy this morning, you would be able to see India Gate just behind this stinking pile of garbage.

Next to the garbage a man was peeing.

And (for once) there was a public loo not even a minute away  –  as I crisply informed him.   I no longer care if it is appropriate to berate a man with his flies open and peeing in public, but someone has to try and shame these blokes.  This bloke, however, was least bothered, and just grinned cheerily back at me.

Someone also has to tell the sweepers that garbage bins (they actually have functional ones in Lutyens Delhi, unlike we mere mortals) should not be thus.  Upside down. 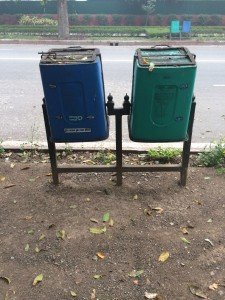 And yes, obviously, I turned them the right way.

Other than this, there were loads of monkeys everywhere, ditto stray dogs, ditto people taking selfies at India Gate, ditto soldiers in full camo gear which is a little disconcerting at 7 in the morning.

But this pollution does worry me.