It’s supposedly a British trait, to talk about the weather, but the latter is so sensational right now here in Delhi, and it lasts for such a short time, that I shall conform to racial stereotype, if that’s OK with you.

After unseasonal rain that messed up the wedding of young friends of ours, and saw the much awaited Indian Open Polo finals cancelled, we are now enjoying f-a-b-u-l-o-u-s weather.

Chilly mornings and evenings, with a deep blue sky, and all the flowers out in bloom, despite the battering they have had from the rain – Delhi is looking at her best at the moment. 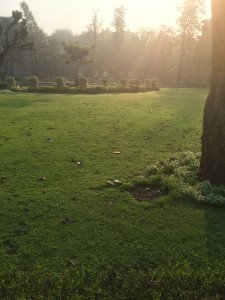 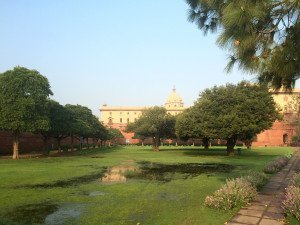 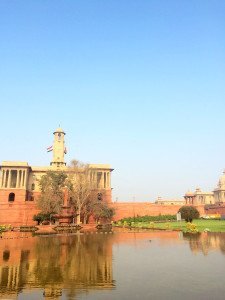 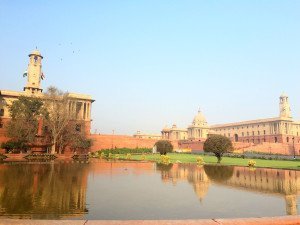 And so I have been out and about, running in the cool early mornings, enjoying these all-too-few perfect days.

I think I’ve shared with you before how different Delhi is in the very early mornings.  Quieter, that’s obvious, without the constant racket from the traffic.

Empty roads.  As in empty. 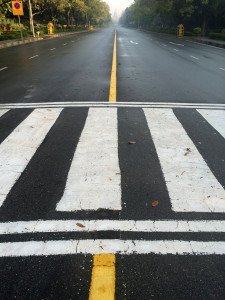 And the people who are out and about at dawn are (quick sweeping generalisation here)  largely nice people.

Walkers, dog walkers, runners, cyclists, youngsters segue-ing down Rajpath –  the people I meet in the mornings by and large greet each other and smile, unlike their daytime avatar, when your average dilliwala is nothing but an aggressive, noisy road hog. 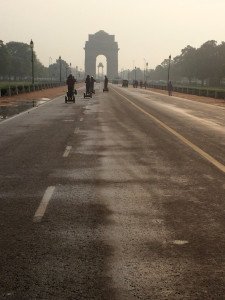 Dawn is therefore a special time, and being out and about early makes me see my city differently and, let’s be honest, much more affectionately than during the noisy, frenzied days.

On an average run through Lutyens Delhi, I see monkeys galore, and dogs, and masses of birds.  And yesterday, I cam across this dear man, driving around feeding Parle G biscuits to the stray dogs.  Through my headphones I heard a honking sound and turned round, fully expecting a cycle rickshaw slowing down, or someone letting me know they were driving behind me…but no, the man slowed down, honked and 3 dogs came charging out of Travancore Palace (how grand.  Such posh strays), tails a-wagging, since they clearly recognised him.

I asked him if he only feeds these 3 dogs and, in perfect if rather stilted English, he replied that no, he feeds any dog he comes across as he drives around.  When I said “Well done, you” he nodded rather formally and said “Thank you ma’am” and then off he zoomed, biscuits ready for the next strays.

And then this morning, out for a run in my ‘hood, I ran past the cows that usually hang around on the “pavement” –  such as it is –  opposite the Hindu temple.  A car slowed down, and a cow trotted up, to be given a chappati.

Delhi is an altogether nicer place when the day is still young.