Just what the hell is it with creepy men who think they have the right to touch a woman’s body?

I was out running this morning, and, before any of you DARES to suggest it was MY fault because of tight clothing  – not that you would, I know, I know. Forgive me, I’m still angry.

So, yes, let me tell you how I was dressed.  Never forgetting I am a senior citizen.

Wind-cheater that covered my bottom.

It was about 7.30 am, near Gol Market, and I was running down an empty street, having just ignored the creepy man who tried talking to me, “Hello madam, where you go? You need help? You walking? Exercise, very good”.  Idiot.

I had slowed down for a couple of seconds to a brisk walk, as I do from time to time, still in a empty street. Fairly wide pavement. And suddenly there’s a hand on my bottom.

Turn round to find this low life greasy haired creep. 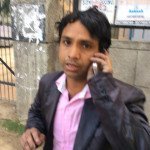 For a split second, I couldn’t believe it.  If the street had been packed, I might even have thought it was an accident. But in an empty street.  No way.

He looked shocked as I started yelling at him in Hindi, then he put the phone to his ear and started saying “Hello Raju, Raju” –  moron, at least pretend to dial numbers before you start “speaking” on your mobile. 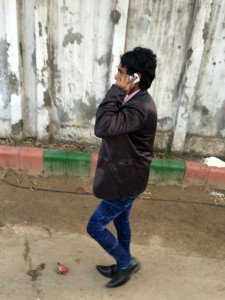 As I continued yelling, he had the nerve to gesture at the phone and say (in Hindi) “Madam, I am on the phone.”

So I slapped him on his greasy head.

Last time I was aggressed in the street by school boys, someone took me to task on Twitter for slapping a schoolboy.

No such compunction this time, let me tell you.

He stopped talking to “Raju” and started on his “Sorry sorry sorry madam” mantra.

Same reply I gave the creeps who told me to f*** off on my last run-in with Delhi men.  If you didn’t do anything, why are you saying sorry?

He tried the Raju trick again, repeating “Hello Raju” as I followed him, taking photos and shouting.

He then tried another approach.  Putting his hands together in a sort of mamaste gesture, he explained why he had touched me.

He got a slap for that, let me tell you (non Hindi speakers, you got it, right?  “I am married”, was his excuse/justification.) 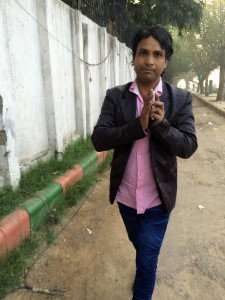 And what was happening while I was shouting and slapping a greasy-haired creep?

Oh, let me assure you, nothing.  Absolutely nothing.

A group of men standing at a bus stop about 1oo metres ahead, all watched slackjawed.  And didn’t move a muscle.

The 2 men reading the paper at the cigarette kiosk, lowered their papers and watched.  And didn’t move a muscle.

The workers in the yard he dodged into, to try and escape…

What does it take to get any degree of civic concern and intervention in this city?

As I left the yard –  creep still “talking” to Raju, though he never got beyond “Hello” (God, what a moron) – one of the school boys, probably about 16 or 17 –  ran up to me and said, again in Hindi, “Madam what happened.  Why were you shouting and hitting that man?”

He got an earful too.

“If you saw a woman hitting a man and shouting, why didn’t you come and help?”

If perhaps one young man reflects on what he didn’t do this morning – didn’t intervene, didn’t help, just stood and gawped –  well, I will feel a little bit vindicated for the touch of that man’s hand on my buttocks and the feel of his greasy hair oil on my hand for the next hour.

I am trying to run with less “stuff” in my hands these days – no water bottle, no car keys – but I am seriously thinking of starting to running with a pepper spray.