I’ve shared with you before the (well-intended) criticism from my family that I am sometimes too negative/harsh/depressing about some of the things that happen here in India –  that’s mainly regarding my blog posts about sexual assault, let’s be honest.

I do try not to harp on too much about this ugly underbelly of India –  for example, I have stopped cataloging every rape that is reported, virtually every day, in our papers.  I had thought that so doing would build up some form of momentum, but I stepped back, on the advice of people I trust.

But then stuff happens that makes you despair.

And reach for the keyboard.

The controversy about the documentary on the Delhi gang-rape is still very much in the news here.

As is the issue of religious conversions and what would seem to be a growing hostility towards the tiny Christian minority in this country.

Put these 2 ugly realities together and what do you have? 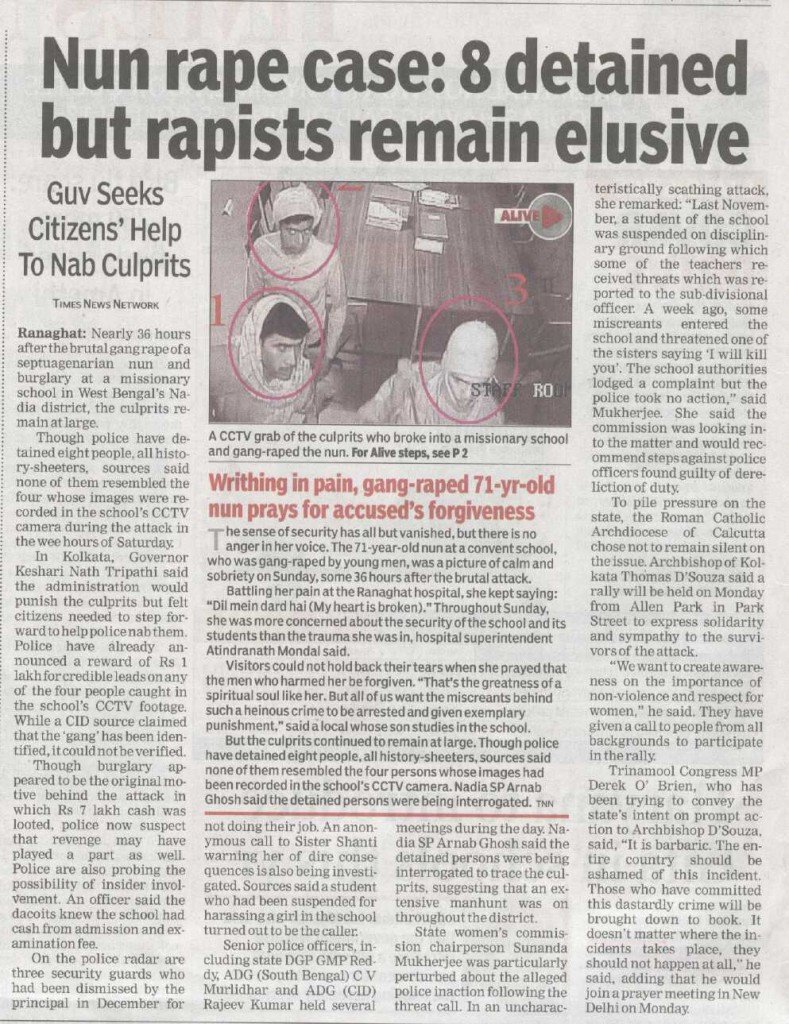 Let me state here and now something I have said on previous occasions, namely no rape is worse than another.

I repeat, no rape is “worse” than another.

And yet, having just said that…what bastards would do such a thing?

The kind of bastard who then rob and desecrate a church, that’s who.

The image of this poor lady, who needed surgery, such was the brutality of the gang-rape, praying for the forgiveness of these bastards is an admirable one, but I do not subscribe to it.

Not one little bit.

Let these low life raping, robbing, sacrilegious bastards be caught and punished as harshly as possible.  Lock them away and throw away the key.

And the hell with forgiveness.

And it goes without saying (and this is addressed to those of you who do not know me) that I am not more appalled by the rape of the nun because she is a Catholic, as am I.  If you read any of my blog posts about sexual assault, you will see that I scream and yell and cry for every women and girl who is attacked.

Closer to home, in Haryana, the state just across the Delhi border, we have 2 very disturbing news items in the papers today :

And this piece (below) is deeply alarming.  India is supposed to be a secular country, remember.

India is not a Hindu state.

Hindus are clearly the majority community, but that does not mean that Hinduism should be taught in schools, nor Hindu holy books taught.  There is a drift here that is beyond worrisome. 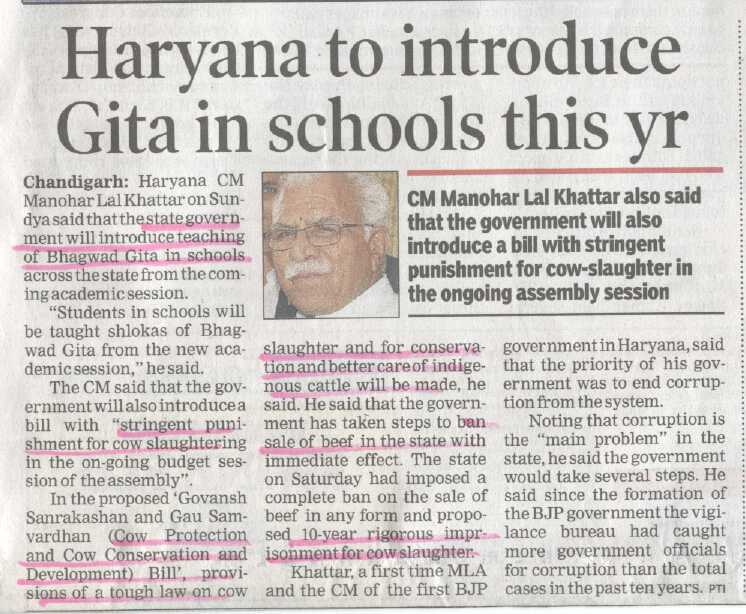 When you think that the bastard “juvenile” who was the most vicious in the Delhi gang-rape got a mere 3 years in a juvenile home (he raped and eviscerated Jyoti) must we conclude from the above that it’s safer to be a cow than a women in India?

The sexual attacks are, sadly, nothing new.  It’s just that now they are being spoken about much more – thank God – but the growing religious intolerance towards one of the tiniest minorities in the country is alarming.

I leave you with the words of Julio Ribeiro, in an excellently written op ed today.  I urge you – please take the time to read it.

Mr. Ribeiro is a retired Indian police officer who has served his country in the most exemplary fashion – just read his moving words, which are frightening in their accuracy and prescience.