A couple of days ago, thrillingly, I was filmed for a possible documentary about running.

(Yes, yes, promise, I’ll tell you more as and when I’m authorised to.)

A delightful young film crew came up from Bombay and with 2 Delhi based youngsters, off we went for a long hot morning of filming yours truly running in various venues.  The film crew’s day had started at 4am, mine at 5, so by mid/late morning we were all sorely in need of sustenance.  Our driver suggested CP (the place, yaar, not me 🙂 ) and so off we went.

First choice for chai and parathas was closed.

What can I say?

Rudest proprietor ever.  So rude that it was verging on being an art-form.

No, we couldn’t have 1 stuffed paratha.  The minimum order was 2.

No, we couldn’t have more butter.  Did we know how much butter cost?

And on it went.

No. Snarl. Slap down the order.

The 5 of us – 4 youngsters and your truly –  giggled away like silly school kids, and as we left, in a fit of final silliness, they persuaded me to go back and ask the surliest man in India whether I could take a selfie with him. 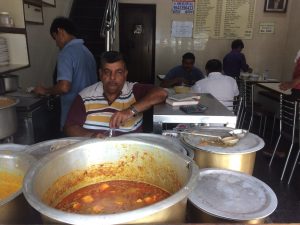 Lo and behold, as they say. 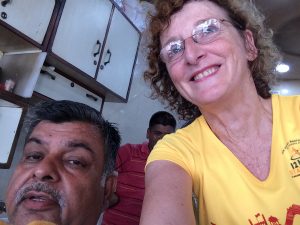 And then came the cracker of a comment.  In English.

Poor sister, is all I can say 😛