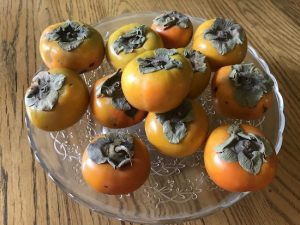 These are “japanis”, known in English as persimmon.

The first time I ever saw a persimmon – up in Himachal a few years ago – I admit to being surprised at the name.

Turns out that the fruit is native not only to Japan but also China and Korea, but in India, at least, it is known as ‘japani”.

“The persimmon is the edible fruit of a number of species of trees in the genus Diospyros. The most widely cultivated of these is the Oriental or Japanese persimmon, Diospyros kaki.”

There are 2 varieties in Himachal – the “flat” ones like these, and the conical softer ones, which come a little later in the season.  I much prefer these flat ones, which are crunchy, and I eat them just like an apple. 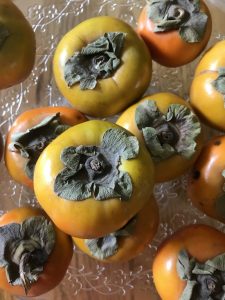 So there you are.

Your Hindi word of the day, via Himachal Pradesh and Japan.