Yesterday, I went for a long run with friends in the forest abutting Buddha Jayanti Park, and a jolly fine run it was too.  Here’s the link to the story & the photos of the forest and the trails, in my t’other blog – runninginindia.rocks.

One of the reasons, & I freely admit it, why I was so keen to go on this run was because of Malcha Mahal, a property in the forest which has the reputation of being haunted.

It isn’t haunted, I’m quite sure, but it is a truly tragic and very bizarre story. 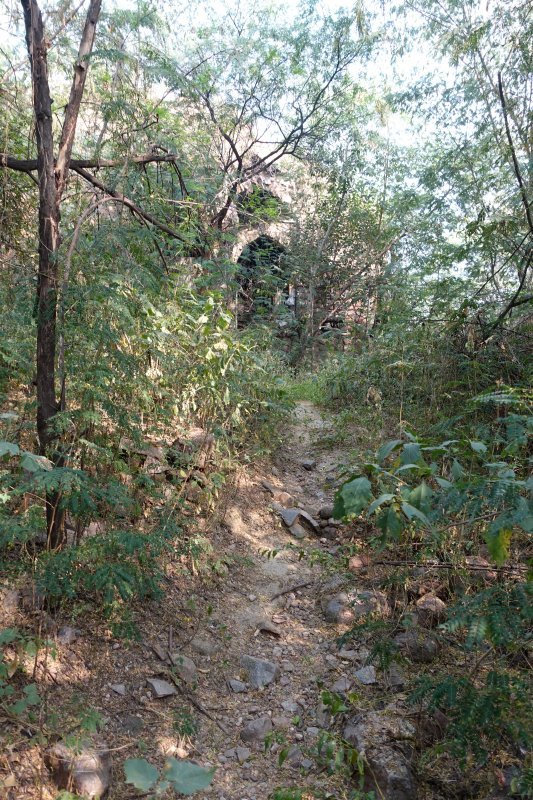 This crumbling old structure, said to date from the 14th century, is almost totally hidden from view, and is surrounded by tall trees and unkempt bushes, with several Delhi police barriers blocking the access points, as well as barbed wire.

2 middle-aged people are said to live here, a brother and sister, descendants of the Royal house of Oudh.

There are any number of stories about the family and the property online – and there are some distinctly unsettling Youtube videos.  More about these anon, but let me first give you some background to this run-down, sad little place.

Back in the 19th century, when the British governed India, they overthrew the King of Oudh and annexed his kingdom.

I am not a historian and, despite being British, hold no brief whatsoever for British colonial rule.

Nor do I know enough about the politics & legalities of Indian rulers vs the Brits to comment but (having said all that) my sympathies lie entirely with the Kingdom of Oudh.

Fast forward several generations to Begum Wilayat Mahal, a descendant of the dispossessed King who wanted reparation from the government, now Indian.

Since she was getting nowhere through the usual channels, she and her two adult children camped in New Delhi Railway Station for years.  Accompanied by servants and dogs (every report always mentions the dogs) they spent years on a platform, and then in a waiting room.

It’s all quite mad. 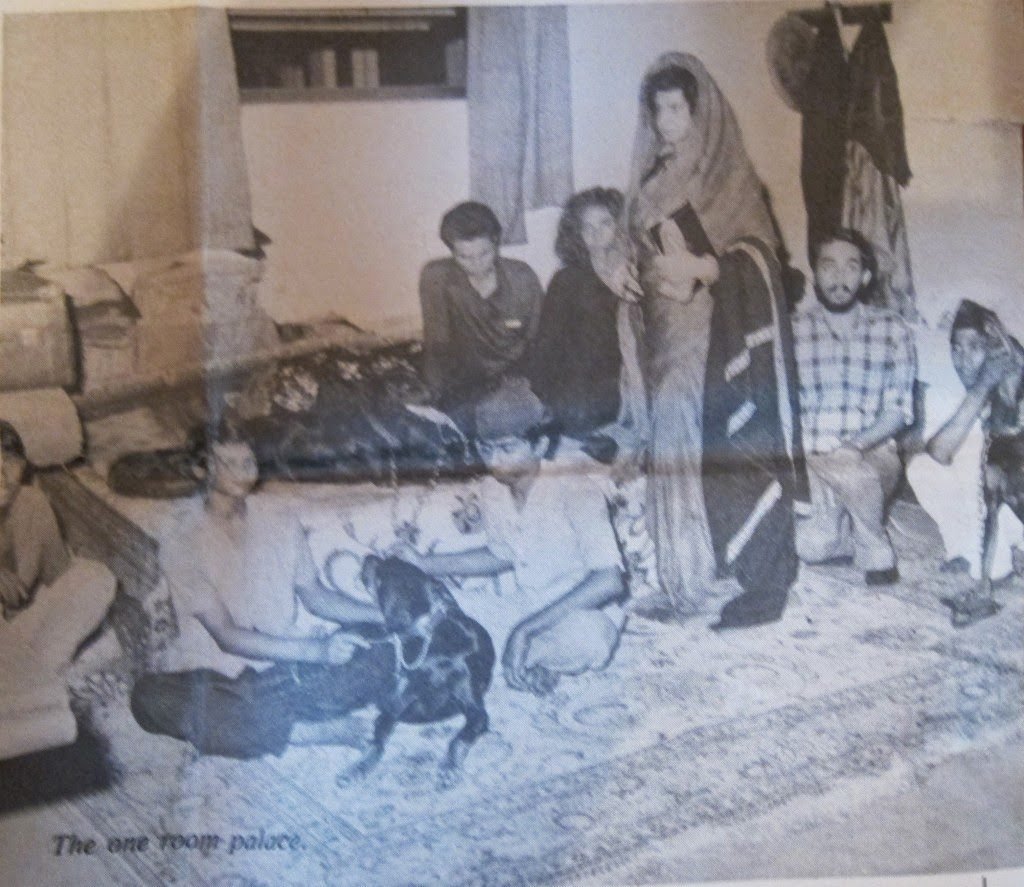 Eventually in 1985, probably out of embarrassment, the Indian government, under the then Prime Minister Indira Gandhi, allocated Malcha Mahal to the Begum, her 2 children, the servants.  And the dogs.

This former hunting lodge had a reputation for being haunted even then, and was in a state of total disrepair.  No electricity, no water, and – one understands – that is still the case today, over 30 year later.

Here is a rare interview with the Princess from 2004: 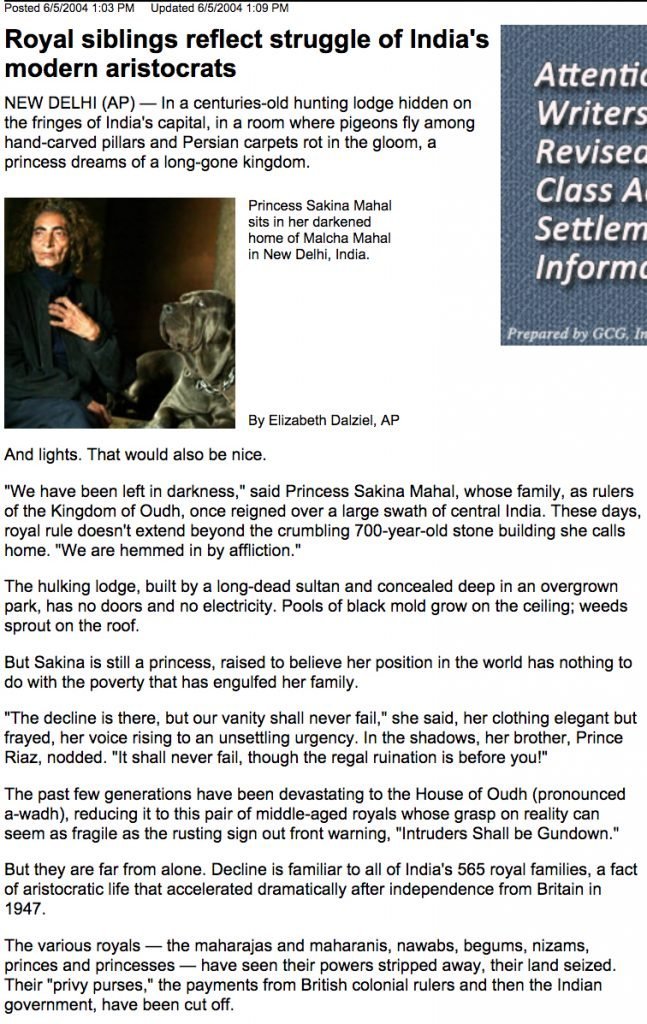 Less than a decade after moving to this ruined pile, the Begum committed suicide by drinking crushed diamonds.

Attacked by goons and treasure hunters, the 2 siblings were allowed to have a gun to protect themselves.

This fact, coupled with the constant presence of fierce, aggressive dogs, all added to the “mystery”

Out of all the sensational articles online about the family and the property, which always focus on “haunted, haunted, haunted”, the one I recommend you read for clarity, reliable info & absolutely no sensationalism at all, is this one by Vikramjit Singh Rooprai.

Not only is Vikramjit (whom I’ve met just once) a seriously knowledgable and impressive scholar of Delhi history, he is also clearly a man of great sensitivity and kindness.  Amidst all the babble and silliness of the haunted/mystery ilk, Vikramajit is sympathetic to the siblings, and is adamant that they should be left alone.

The property, which I glimpsed yesterday, is bang next door to the Delhi Earth Station, all modern & connected, as one would expect.

And just a couple of yards away is a crumbling old pile, with, one understands, 2 well-into-their 50s recluses, living with virtually nothing.  But with a gun and dogs. 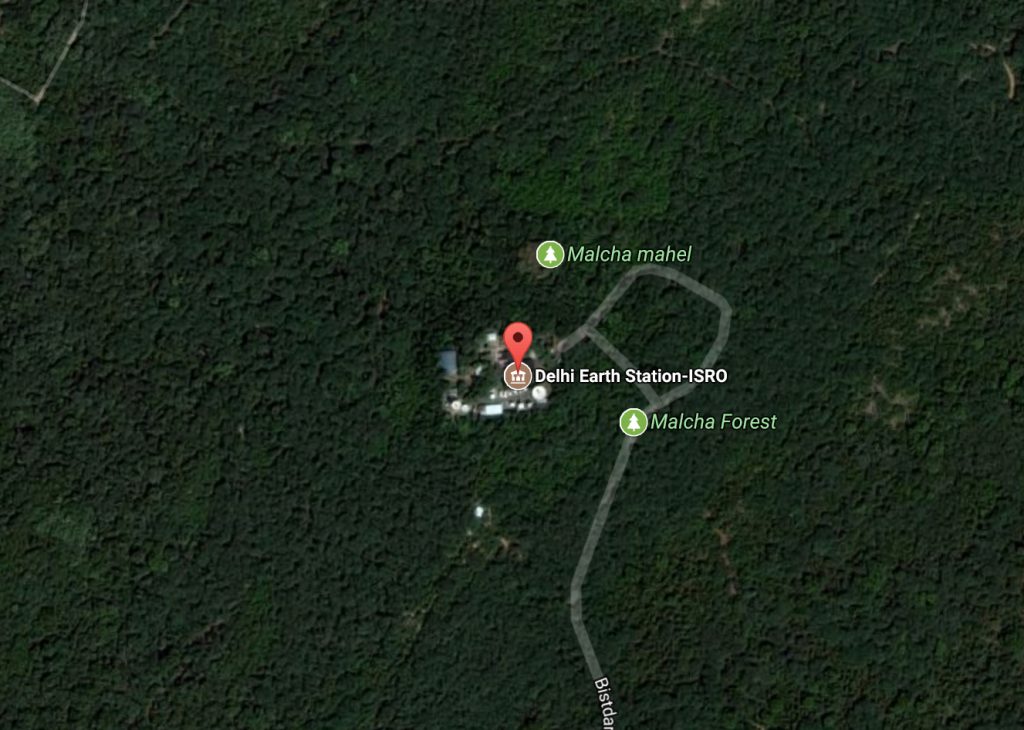 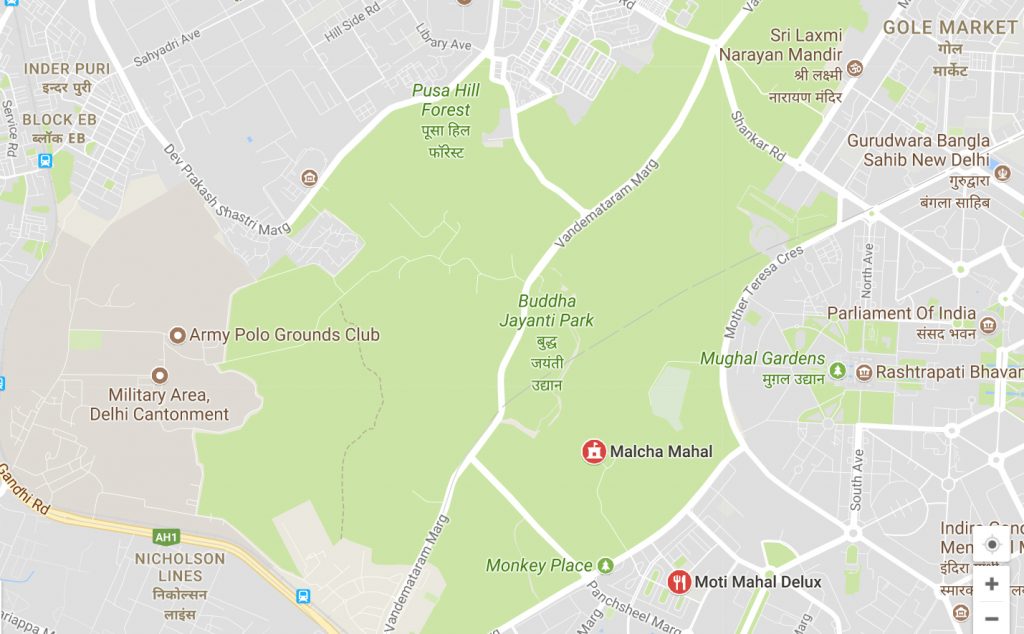 When you read all the stories online, what boggles my mind is the intrusiveness of people trying to get access, and their presumption that they can walk into someone’s home, just because they’re odd.

Just look at this screen grab I took from a Youtube video about Malcha Mahal: 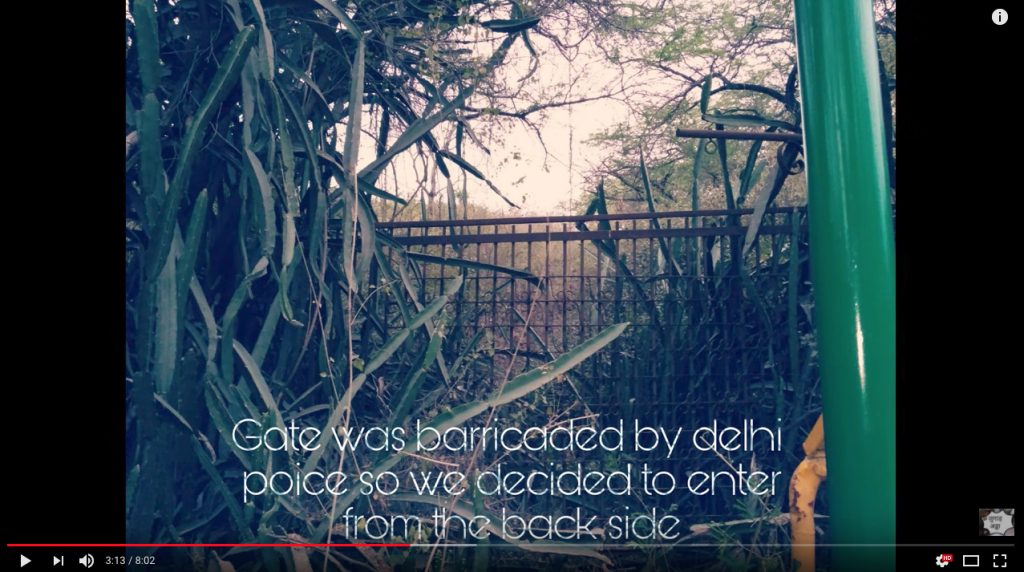 I guess I am also peripherally guilty, since I did walk perhaps 5 metres behind the Earth Station water tank, from where you get this view: 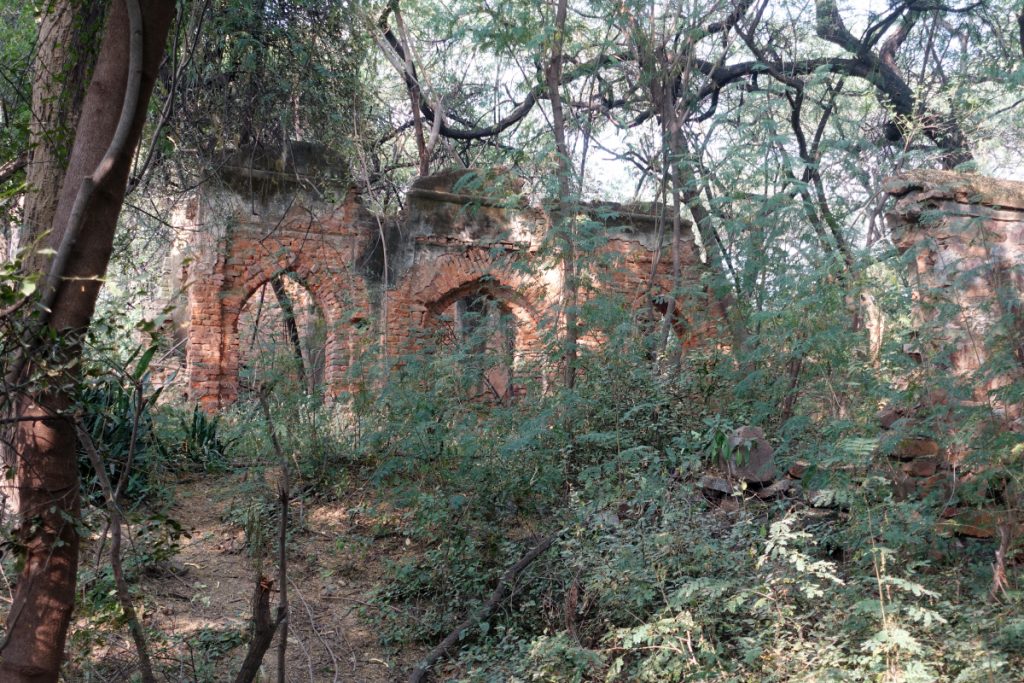 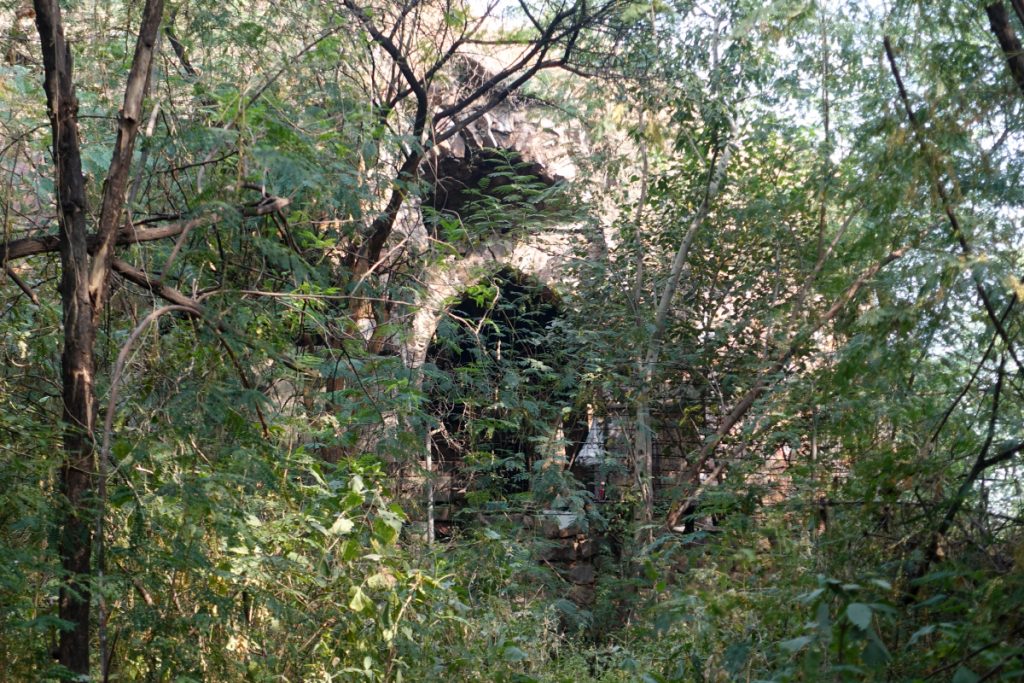 But that was that.  No further.

Just because these 2 people are recluses and no doubt somewhat eccentric, doesn’t give anyone the right to think they can march into their home and have a look-see.

I watched part of another truly terrible, arrogant Youtube video, but couldn’t take very much of it: 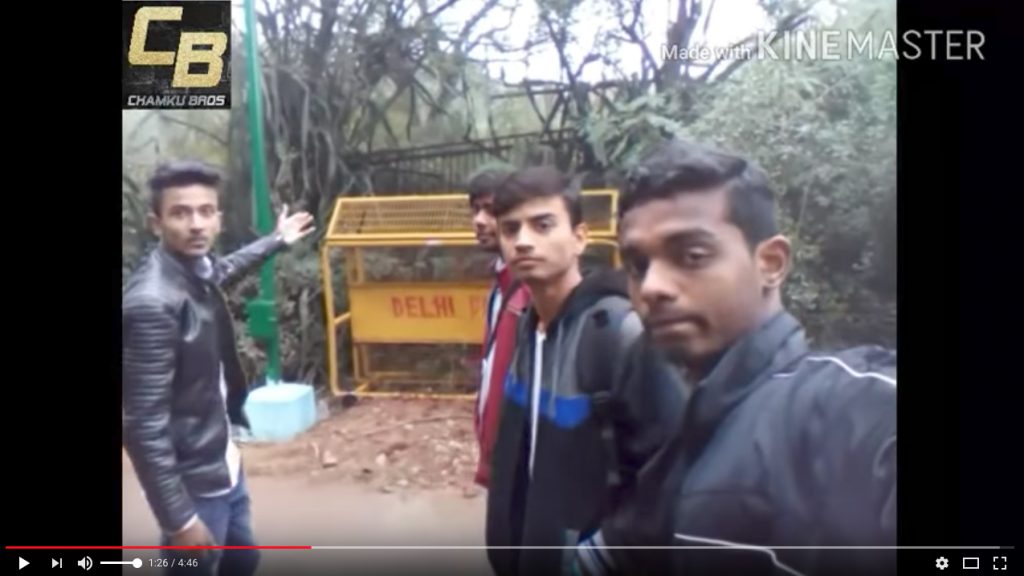 It is all very pathetic, actually.

Just a short drive from a busy main road live 2 people lost in a world of history, living in dire poverty and clearly unable to deal with their changed lot in life.