…goes one of the lines of the Indian national anthem, and can be translated roughly as:

“(the name)…echoes in the hills of the Vindhyas and Himalayas,

Mingles in the music of the Yamuna and Ganga”

The words of any national anthem are always a little stiff – is that the word I’m looking for? – but basically in this section of the anthem, the idea of pan-Indian unity and patriotism is being invoked, in the ‘from the hills to the rivers’ analogy.

So this memory of 26 January last year fits the bill perfectly.

I was doing the Chadar trek, on the frozen Zanskar in Ladakh, and we rigged up a flagpole in camp, and sang the national anthem. 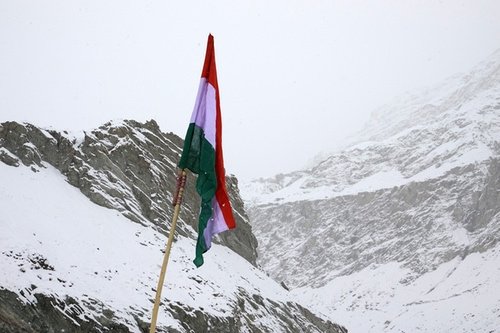 Totally Vindhya Himachala-esque, don’t you agree?  The Indian flag with some of the country’s highest peaks as a backdrop.