In less than 3 weeks, I’m off on my next big adventure, climbing a mountain called Banderpoonch .

So, by way of practice, yesterday I climbed the mountain (whopping big hill?) opposite the Himalayan Trout House where we are staying with our friends Shefali & Christopher Mitra. For years this mountain has been the view from our room, and it has featured in innumerable Instagram photos. 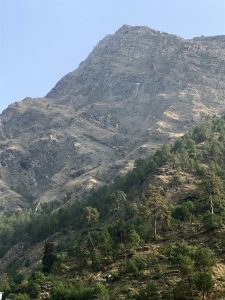 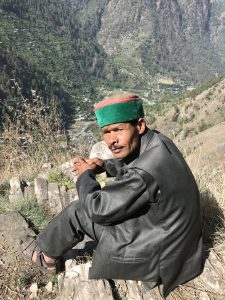 I have twice climbed part of the way up, once with Shefali and a second time with Alison and Shefali, and both times we went as far as the house of our guide, Neerath (above), where we were copiously fed and watered.

Both times I remember a short kip on his balcony being part of the day’s programme.

Determined to make it to the summit of the mountain, something I’ve wanted to do for years, I sort of frightened myself into doing it by telling myself this was a dry run for the upcoming Banderpoonch climb.

The climb up to Neerath’s house at Nadar wasn’t too bad, and he told me we’d taken several steeper-than-usual short cuts, so I felt moderately proud of myself. 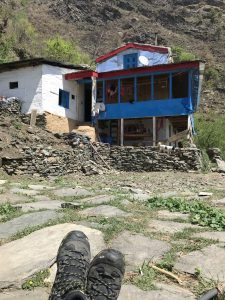 We got there by about 10 in the morning and I was all for having a cuppa and pushing on to the summit, but hospitality demanded that we sit for a good hour and a half until lunch was ready. 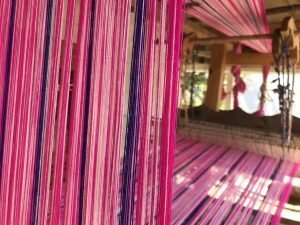 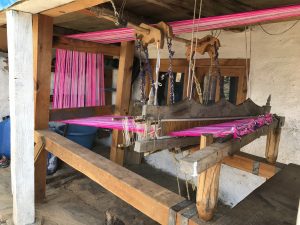 I checked out his wife’s loom, and had a brief kip on a mattress they brought out from the house, and I watched the lammergeiers flying below us (that’s always a thrill, being higher than the birds).

We also had to separate the dogs from time to time. 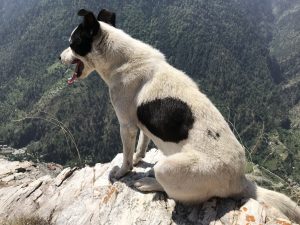 A cute dog had attached itself to us at the start of the climb, & became increasingly proprietorial about us as the day wore on.

Problem is, Neerath has a dog, so after a bit of initial sparring, things settled down. 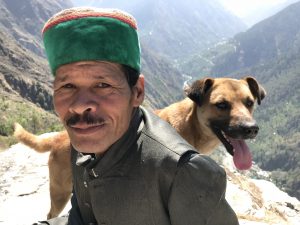 Then biscuits were produced for me.

Then lunch was served.

A few wallops, and the dogs were again separated. 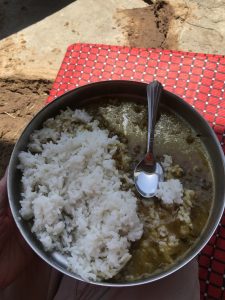 In the end, only the dog in residence got fed, and “our” dog sat closer and closer to me, until it was time to head back up the mountain.

It was hot yesterday, and there is absolutely no shade on the mountain, with only the occasional tree for a bit of scrappy cover, but the views were amazing, and we plodded slowly upwards, until we got to the top.

After admiring the view down the valley, and picking out villages and houses and roads I recognise from running much of the Tirthan valley, we walked along the ridge for quite a distance.

Climbing ever so slightly, as the ridge gently rose, we startled a group of langurs who made one heck of a racket until we were out of their territory. We passed trees that had been chopped down – for house building, Neerath told me, and since he’s a carpenter, he should know.

Sad to see so many trees cut down, lying there waiting to be carried down the mountain. That will be quite an exercise, given the terrain and the weight of the wood.

Then we arrived at the temple I knew marks the summit.

And what a beauty it is.

I’d expected something large-ish, and perhaps inhabited by a resident priest, and had actually spent part of the climb chiding myself for not bringing small bank notes for the inevitable offerings.

I’d imagined something made of stone or concrete even, painted a bit garishly perhaps, like the temple at the top of the Jalori Pass.

What I had absolutely not expected was a teeny wooden shrine, with the god actually at the foot of a tree.

It was one of the most peaceful places I have ever been to in India and felt deeply spiritual.

There was absolute silence.

No one except Neerath and the dog.

Neerat had picked up some branches from a pine tree and when I asked why, he said they were for the “devta” (god) because he had no flowers to offer.

We both took off our shoes (hiking boots in my case) and circled the tree, which had sacred threads tied around it. The neighbouring tree was festooned with trishuls (metal tridents) and other metallic objects, all offerings to the god.

We sat for a long while in companionable silence.

I had a little cry, as I always do when in the presence of great natural beauty.

I prayed for safety and success in my upcoming climb as well as for a high altitude marathon I’m running in September. It seemed suitable to request high altitude favours at the summit of a mountain.

It was with great reluctance that I turned to descend.

Sad to leave such beauty and peace behind.

Sad to leave something I’d wanted to do for years, and which surpassed all expectations.

The climb down was, as expected, easier on the lungs with each descending step, but a strain on ageing out-of-practice knees.

We took a different route down, going via a pretty village where every single person is one of Neerat’s family.

We had delicious black tea at his brother’s home, with 2 curious lambs and 2 equally curious young ladies for company.

Everyone was chatting in Himachali, but since one of the young ladies was staring curiously at my camelbak, when I heard the word “pipe” I chimed in, in Hindi, “It’s for water. There’s a bottle inside the bag.”

Gales of laughter all round, as they realised that the strange old lady sitting on a log with someone else’s dog for company could speak Hindi. I left with an invitation to spend the night there, the next time around.

2 minutes after we left, Neerath asks me if I’d like another cup of tea. His aunt, in the house over there, had invited us. I followed the direction in which he was pointing, and there was a lady outside her house, yelling something or other.

And on it went, the most pressing invitation coming from another sister-in-law who was busy mixing putty to plaster her house.

Where had I come from?

Why had I climbed the mountain?

The notion of climbing for climbing’s sake sent her into peals of delighted laughter.

I guess when you live so high up, and have to go down to the valley for every single thing you require over and above the food you grow, and then lug it on your back back up the mountain (there are no roads. Did I mention this?) so yes – I guess the idea of wandering up a hill simply for the view and nothing else, must seem pretty daft.

She continued with the questions.

Why did you want to see the temple?

Hoots of laugher at this reply.

Pray? You prayed? How did you pray?

I joined my hands together which is, lucky for me, both “namaste” in India and how we pray in church.

What had I prayed for?

I decided not to make her laugh any more by explaining that I prayed for success when I attempt to climb a much higher mountain in 3 weeks, so just said that I’d prayed for my family.

That seemed an acceptable answer, and off we set down the hill, but not before the good lady had scrambled to the other side of her house, and was yelling goodbye from another window.

Shouting out hellos to every house on the way down through the village, and declining cups of tea a’plenty, we met a group of wee little children walking up to the village in their school uniforms. Tiny little things, but they all politely namaste-d me, balancing bunches of bright red rhodeodendrons in their little hands.

Are those for your mother, I asked one little boy who just smiled noncommittedly.

No, said Neerath, they eat them.

One aggressive dog, one aggressive bull and 3 cows later, a herd of sheep, the sound of jungli murgi and parakeets in the trees, we kept on descending, Neerat, the dog and I.

When we finally hit “civilisation” – ie the bridge at Gushaini village – my legs felt like jelly and I actually wobbled for the first few steps on flat ground.

As we walked back towards the lodge, Neerath smilingly told me that he had never really expected me to make it to the summit.

It’s difficult, he said, trying too soften the blow of his frankness. Not many people make it to the summit, he kindly told me.

Today, I can hardly move I’m so stiff, so clearly a lot of stretching and exercising is called for, over the next 3 weeks.

But, for today, I can sit and look at the wonderful view from my balcony and enjoy the feeling of accomplishment and, yes, not a little pride.

Now what’s all this about India’s gold-filled milk?