There are elections on today in 3 states in India, including Haryana, the neighbouring state to Delhi.

Gurgaon, a new satellite city of Delhi is in Haryana, so friends who live and work there have a day off, which meant longer, lazier cups of tea at the club this morning, since no-one was rushing back for work.  Carine Barbe, a dear friend and a fellow Ladakh trekker, was there, relaxed despite a busy week of polo ahead of her. She is one of the very few female polo players in India, and is playing in not one, but 2 tournaments this week.  Allez les filles !

I walked, as usual, this morning through the lovely jungle that surrounds the polo club.  Suddenly I was not alone. First one buffalo, then 2, then a 3rd came silently out of the still-damp bushes, and walked close by me. There were 8 of them, then 2 dogs, and then the gai-wala, who stopped for a chat.

Why did I have a piece of wire in my hand ?

Because it was across the path (a snare, I suspect) and I didn’t want a horse or a dog, or indeed a buffalo, to trip on it.

And why was I carrying a big piece of plastic ?

Because I found it, and thought I should throw it away properly.

And which country you are from ?

YES !!  I always wait for that riutalistic question, which is part of my Living in India DNA.

And where is the sycophancy in all this, did I hear you ask ?  Well, just take a dekko at the photo below, featuring a south Indian politician. I was going to say political heavyweight, but…. 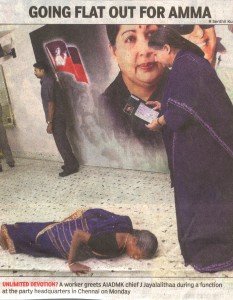 And she’s not even contesting these elections…

To counter such an image, I think I should end on a happy note.  Which will be the role of my photo of the day, taken on Sunday in Mehrauli : 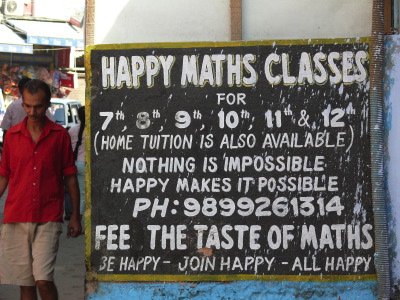 Now why doesn’t a political party adopt this as a slogan ?